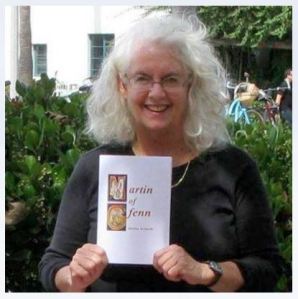 Today I’m delighted to offer for your reading pleasure a guest post by author and fellow blogger Martha Kennedy, shown here with the first of her three award-winning novels of historical fiction.

Martha has kindly given me permission to post this short story, and without further ado, here it is:

“I teached it.” Lilian smiled. “I gave up. Just three months ago, as it happens.”

“Good. I could never date an English teacher. They’re always at you about your grammar.”

“Pretty much ONLY when you’re in their class and they’re paid to do that. The goal is to help students write and think more clearly so other people can understand them should they ever wish to you know? Communicate something?”

“I didn’t want your opinion. But thanks. Glad I retired so we can be on this date. So, where we going?”

“I thought we’d go over to the laundromat and watch the clock.”

“I already did that on a date, back in high school. Boyfriend – Tony – had no money. I don’t know why we did that, parked his old Ford in front of the laundromat. He said it was so we could be together, which, I admit, was sweet, but it was so cold and the laundromat wasn’t even open. It had this phosphorous-green kind of light inside coming from the green neon circling the clock. I don’t know if you’ve ever seen one like that. Ghastly.”

“Colorado Springs. It was winter, too. I was home for Christmas break.”

“I guess you didn’t go out with him long.”

“Are you going to marry me?”

“Doubtful. In fact, I don’t see much point in your wasting the gas to drive over to the laundromat. Just let me out here, OK?”

“Baby, c’mon. Let’s try to work this out. Sure, we will have had our differences…”

“Wow, now you’re hitting me with arcane conditional verb tenses? On a first — and only — date?”

“I know I will have felt regret over this for a long time. Can’t we start over?”

She felt dizzy. She felt as if she’d been in a long-term dysfunctional relationship with Ralph for years. She could almost remember their breaking up and making up and starting again, repeatedly — even for the sake of the children! A whole lifetime of strange little arguments.

“We haven’t even started, Ralph. Like I just said. I just met you.” Lilian sighed. “I knew internet dating wasn’t a good idea. I wish I hadn’t let Lana push me into it. I know she had her reasons and they had NOTHING to do with my happiness.”

“What are you talking about?”

“I think I’m talking to myself, Ralph. Look, please stop the car and let me out. This isn’t the way I want to spend my evening. I’d rather walk all the way home in the rain than do this. It’s not for me. I’m too old.”

“No it isn’t. Age is a lot of things. It’s experiences and a knowledge. It’s finally ‘getting it’ you know? Answers to questions about who you are?”

“I think you just need to get laid.”

Ralph pulled over to the side of the road. Lilian collected her purse and wrapped herself in the brightly colored blue and lavender shawl that drew attention away from her wide hips (liability) to her shining blue eyes (asset) and got out of the car.

“We could go out again.”

Lilian closed the door and stepped up on the curb. Not much traffic here. She couldn’t expect a taxi to come zooming by looking to pick up a late evening fare. She fished around in her purse for her cell phone and then realized she’d taken it out to call a cab while she was still in Ralph’s car. “Shit,” she thought. “Wait, there’s a pay phone.” She hurried down the street where she found only the dangling remnant of a long-lost communication device. “All the quarters in the world won’t help me now,” she thought. “Oh well.”

She walked along the sodden street. The rain had stopped and reflections of the streetlights made glimmering images on the sidewalk. The damp, fallen leaves were fragrant when she stepped on them. “I’d have missed this. Life is certainly surprising. I’d have missed this.” The moon was breaking through the dissipating rain clouds and the night took on a magical quality, like a story in a kid’s book.

A car came up behind her, slowed, passed by. Something flew onto the sidewalk in front of her. She reached down and picked it up. It was her cell phone, wrapped in a note.

“I can’t believe you didn’t recognize me, even when I invited you to go to the laundromat and watch the clock. I thought for sure you’d know then. I know it’s been more than forty years, but I thought there might be a little something familiar.

Martha, author of five books, has recently published three works of historical fiction. Her first novel, Martin of Gfenn, is the beautifully written, tragic story of a young fresco painter living in 13th century Zürich. It was awarded the Editor’s Choice by the Historical Novel Society Indie Review and the BRAG Medallion from IndieBRAG in 2015.

Her second novel, Savior, also a BRAG Medallion Honoree (2016), tells the story of a young man in the 13th century who fights depression by going on Crusade. Her latest novel, The Brothers Path (a loose sequel to Savior), looks at the same family three hundred years later as they find their way through the Protestant Reformation.

I haven’t yet had a chance to read the last two of her books, but they’re sitting on my night table trilling their siren call, and judging from my enjoyment of Martin of Gfenn, I know they too will be wonderful reads.

Martha, also an accomplished artist, lives and hikes in Monte Vista, in the San Luis Valley of Colorado with her three dogs.  For more information, I invite you to check out Martha’s blog, Where’s the Windmill?  for her stories, as well as her website and  Amazon page for more information about this gifted author.