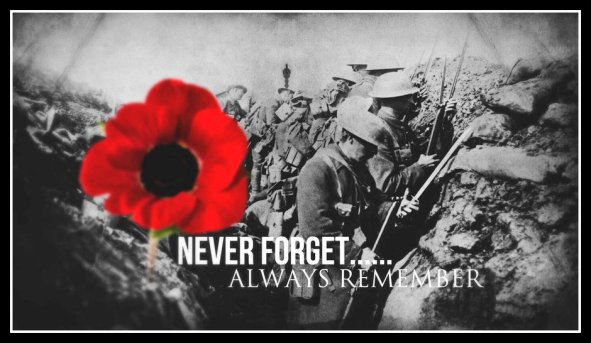 1916:  They didn’t give you long to live on the Somme.  About three months was the average life expectancy.  Image Credit:  Chris Holley, Deviantart

In Flanders fields the poppies blow
Between the crosses, row on row,
That mark our place: and in the sky
The larks still bravely singing fly
Scarce heard amid the guns below.

We are the dead: Short days ago,
We lived, felt dawn, saw sunset glow,
Loved and were loved: and now we lie
In Flanders fields!

Take up our quarrel with the foe
To you, from failing hands, we throw
The torch: be yours to hold it high
If ye break faith with us who die,
We shall not sleep, though poppies grow
In Flanders fields

Composed at the battlefront on May 3, 1915 during the second battle of Ypres, Belgium
by Lieutenant Colonel John McCrae [1872-1918], Canadian physician, soldier, teacher, poet

In August 1914, Great Britain declared war on Germany.  Since Canada was the senior Dominion in the British Empire, this meant Canada was automatically at war too.

British soldier John McCrae’s solemn elegy, written almost a year into World War I in May 1915, still brings a lump to my throat when I think of it.  It was one of many poems we school kids had to memorize, , and it has remained in my mind for over half a century.

Remembrance Day (originally called Armistice Day) takes place on the date and time that fighting in World War I came to an end via the signing of an armistice between the Allies and Germany calling for a ceasefire at 11 a.m. on November 11, 1918 – the 11th hour of the 11th day of the 11th month.  Each year, people in many countries take time out from this day for two minutes of silence, accompanied by the heart-rending bugle dirge of the Last Post, in honour of the soldiers who gave their lives in what was known as the Great War.

[Stretcher bearers struggle in mud up to their knees]

On this day, we Canadians are called to remember the 619,636 young Canadian men who enlisted with the Canadian Expeditionary Force, some 424,000 of whom served overseas.   We bring to mind the unrecorded number of Canadian volunteers who served in the Royal Navy and the British Army, as well as the 1,388 Canadians who died while serving with the British Flying Services.

However, statistics do not describe the horrors that must have been faced by these young men (and young women who had volunteered to serve as nurses, many of whom found themselves at or near the front lines in the performance of their duties) during what was known as “the war to end all wars.”

Technology has altered the face of war in modern times, but the ugly, unforgettable fact of war remains:  pain and death and dying.

“The 1915 Battle of Ypres, the first engagement of Canadian forces in the Great War, changed the Canadian perspective on war. Ypres exposed Canadian soldiers and their commanders to the modern warfare of the time. They had already experienced the effects of shellfire and developed a reputation for aggressive trench raiding despite their lack of formal training and generally inferior equipment.  [They were equipped with the frequently malfunctioning Ross rifle, the older, lighter and less reliable Colt machine gun and an inferior Canadian copy of British webbing equipment that rotted quickly and fell apart in the wet of the trenches.]”

In April 1915, they were introduced to yet another facet of modern warfare:  gas.

The Germans employed chlorine gas to create a hole in the French lines adjacent to the Canadian force and poured troops into the gap. The Canadians, operating for the most part in small groups and under local commanders, fired into the flanks of the German advance, forcing it to turn its attention to the Canadian sector.

For three days, Canadian and reinforcing British units fought to contain the penetration with a series of confused and suicidally brave counter-attacks, while using handkerchiefs soaked in urine to neutralize effects of the gas. What the Canadians lacked in expertise, they made up for in sheer guts and determination.

One in every three soldiers became a casualty.”

And what of the indelible scars left on the bodies and psyches of survivors?  What does it do to a young man to watch himself become a killer, perhaps even eventually inured to the brutality of it all? For a hale young man to return home scarred and battle torn, haunted by endless nightmares?  Or to endure the agony of severe injury, long and painful recovery, and come back to civilian life as a paraplegic who must somehow carve a niche for himself in an uncaring world?

My Note:  Although women in the military have a history that extends several thousand years into the past, throughout a vast number of cultures and nations, from ancient warrior women to the women currently serving in conflicts, I use the male gender here because in the years of WWI, it was the men who enlisted to become soldiers and who found themselves on the front lines in battle.

The role of women in the Great War was largely associated with weeping, waiting and working: as wives, mothers and sweethearts; as factory, munitions and land workers; as nurses on the home front, red cross workers, VADs and WRNS who worked in all the Theatres of War.

Nowadays, of course, the same questions apply equally to female soldiers who serve – and suffer – along with their male counterparts.

From the time humankind first began walking upon the earth, battles and wars have been fought.

And until this world evolves far more than it has, armed conflict in the name of whatever ideals its soldiers (or their generals) embrace, will continue.

Still, on this day of remembrance, I can’t help thinking of the untold millions of lives lost the world over, wasted as their life’s blood gushed into the earth; of the pain inflicted on individual warriors, their families, and their loved ones; of the everyday anger and hatred that have been passed on from generation to generation of people of every colour and religion across this planet.

“Traces of nobility, gentleness and courage persist in all people.”  [Walter Crawford Kelly, Jr., 1913 – 1973] From the depths of heart and mind, I believe this to be true, no matter how difficult it can be to see past the ugly to the good, or how rarely I actually manage to live up to my ideals.

I’m not wise, or great, or perfect; what I do or don’t do makes no difference out there in the big world.  However, I believe I can make a tiny difference in my own life and in my small world by attempting to honour all of the men and women who have needlessly died or been irreparably damaged in the name of war,  even though some of them are – or have been – called “the enemy.”

Today, even as I honour the courage shown by all those who took up arms and joined in battle over the ages, I can only choose again to attempt to follow the living example of an honourable and peaceful man, himself a follower of another man whose profound teachings influenced the world: