As you know by now, every  now and again I dip into my old “Memory Lane” files, and this time I came across a soliloquy from the mid-eighties when our three children were teenagers.  Here it is: 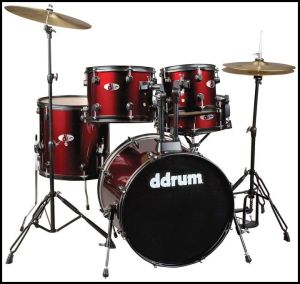 DH and I bought Number One Son a drum set for his birthday last month.  Just between you and me, that was the biggest mistake we ever made.

I would estimate that he has actually drummed on it for a total of perhaps fourteen minutes, although he swears that he just doesn’t have the time just now, but will use it all summer long without fail.  Right.

I’m certainly inclined to believe it’s true that he doesn’t have time; after all, what with talking on the phone most of the evening and lying on his bed gazing at the ceiling the rest of the time (contemplating the theory of relativity, no doubt), his life is full.

Parenthood is a gift.

God knows I try to be patient with the boy.  It’s just that dealing with a sixteen-year-old who lets nothing natural or nutritious pass his lips until he has first consumed all the junk food he can find, and whose gamut of emotions runs from moody to bestial, can be trying.

Each night I lay me down to sleep praying that someday he will be able to support himself, and that he will pack his 1000-decibel stereo, his fifteen pairs of size twelve running shoes that he leaves directly in front of the front door, and his white elephant drum set, and sally forth to direct his own frail barque across the sea of life.

I don’t worry about whether he’ll eat well on his own.  I already know.  He won’t.  But he has proved to me beyond the slightest shadow of a doubt that the human organism can survive for extended periods on little more than Pop Tarts, potato chips, and numberless jars of peanut butter.

Number Two Son has learned about pressure points in karate school; and I have good reason to stay out of his reach these days, having learned from painful experience that, while I’m having a tender mother-and-son moment with him, he’s quite liable to suddenly start overhauling the nerves in my arms, neck, or wherever he’s practicing his latest pain manoeuvre.

Makes one a trifle cautious, that does.

Not only that, but it’s taking your life into your hands to allow him anywhere in your vicinity.  That child can kick like a mule, which is called kick boxing and apparently is another thing they teach at karate school.  It’s disconcerting to be standing, say, at the sink, placidly peeling potatoes – and suddenly hear a savage yell and see a bare foot suddenly appear at a spot mere centimetres short of your face as he whips from one karate pose to another in a blur of motion.

The boy is good, there’s no denying it; his mother, on the other hand, is fast developing a nervous disorder.

One and Only Daughter’s greatest angst in life at the moment is zits.  To hear her tell it, her whole face is one enormous pustule. I had more zits on the end of my nose than she does on her entire face, but try and tell her that? “Oh, mom, you just don’t understand,” is the standard response as she heads for the bathroom to stare at the offending bits yet again.

For Valentine’s Day a couple of weeks ago, the boys in her class were given the once-in-a-lifetime opportunity to buy a single red sweetheart rose to give to their favourite valentine, and One and Only Daughter got six of them. Six!

I have to tell you that this would have done wonders for my ego, but she took it all in stride, commenting only that there must be a lot of guys out there who like stick legs.

The wretched little ingrate knows perfectly well that her mother would kill for gorgeous legs like hers, so I contented myself with the single acid comment, “You’d prefer piano legs, maybe?”  It was not well received.