In the wake of Orlando, I offer this essay written from the heart by the father of a young gay man:

Fags. I am the father of one.

If you are reading this and think homosexuality is a choice, please stop reading right now.

No child chooses to come home crying at ten years of age because some other kids called him a faggot. It is no more a choice than the color of the eyes you are born with.

My little boy was different; Justice would never cry when called names. I would only find out when his teachers, friends, or his brilliant, brave younger brother told me. Never from Justice and never a tear. He wouldn’t give anyone the satisfaction of knowing they got to him.  Kept it all inside.

But I knew it hurt, like only a parent can know, even while I was telling him, “In this house, no one will ever judge you or love you less.” I have often wished my son was more militant, and not just about his orientation. I named him Justice. I suppose I was projecting, creating a warrior for social justice. 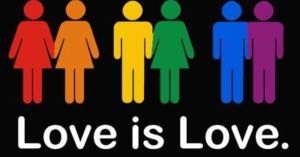 His militancy is living life with no compromises. He tells me he should not have to advocate for how he was born; after all, straights don’t have to.  That is the ultimate militancy. But it worries me.  If you are looking to hate someone for who they love, you can tell who my son is.

I worry about all my three boys.  When I drop off my little one at daycare, I worry about his heart and soul. When my middle one goes on a road trip with his buddies I worry, will he drink too much or get in a car accident? With my oldest, it is a different worry:  he may be the catalyst for harm. I worry, what if someone decides to beat him for his differences in a metro or on the street or at a place he may hang out one night?

It should NOT be that way. People ask me, do you wish he was “straight” and I answer yes!  Not because of who he is, but because, as a parent, I want my child’s life to be as easy as possible, and being a minority makes your life harder. I know this first hand, being part of several minorities: I am “Italian,” a “Leftist,” a “Comic,” but none of these will get you killed in Montréal.  Well, except the “comic” part by my poor, suffering mamma – understandable.

But my son could get harmed, even killed, for something he has no control over.  When other Orlandos happen, I am reminded of this stark possibility. It angers me.

The term Gay Pride is not about them being cocky–pun so not intended, but unavoidable–it is about using the word pride to replace shame.  It is we are human as well.

I understand Gay Pride; it is in my blood.  I changed its diapers. I watched it take its first steps and grow into a man.  And the possibility that someone could take that pride from me because of who he loves worries and scares me, so I do the only things I know:  communicate, and hope. 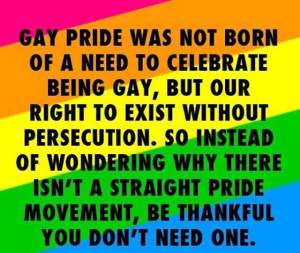 Susannah’s Note:  I’m not normally a front-line kind of person, but persecution upsets me, no matter where it’s coming from or where it’s directed–whether it takes the form of gay-bashing, bullying in the schoolyard, hate-mail on the internet, bigotry, bombs in churches and malls, or any of the endless means we humans can devise to damage and destroy other humans.

I think hatred is an evil thing because it stunts and damages the heart.

Children don’t come into this world with a predisposition to hate.  No, that they learn easily and well from those they trust to teach them about the world.

And we, their parents, are the ones first responsible for teaching our children what it is to love, not in the sentimental or sexual fashion that is plastered over our billboards and television sets, but the kind of love that refuses to give in to negativity, that tries instead to examine how it would feel to walk in another’s shoes, that respects others even if they aren’t carbon copies of us.

What makes this kind of love so difficult to practice is that it means taking the chance of stretching our hearts instead of giving in to whatever seductive fear or hate propaganda we may have learned in our own lives.  Giving in is so very easy; it’s much, much harder to do the right thing.

But until each of us human beings has learned to curb the fear and hatred and plain viciousness that are there for the taking in our world of good and evil–and then model for our children how it’s done–I don’t see how there can be any hope for real peace on this planet.

Namaste,
Susannah
[This article, with a few small editorial changes, is taken from a post on the Facebook page of Montreal comedian Franco Taddeo.  Well said, Mr. Taddeo!]